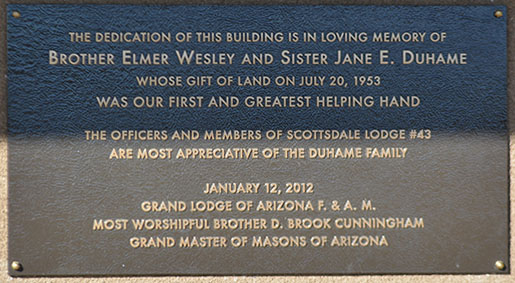 The earliest notation is dated September 12, 1949. By this time, a number of Masonic Brothers in the Scottsdale and surrounding areas felt the organization of a new Masonic Lodge in the Scottsdale area was in due order. Fraternal needs were being met through participation with Tempe Lodge 15. There was some hesitation because of possible objections to the formation of another Lodge to the north by Brethren from the Tempe Lodge.

On September 12, 1949, it was recorded that “…all concerned Brethren unanimously decided to contact the Grand Master on the matter of establishing a new Lodge…” Several days later, Brother Louis Myers provided the official address of the Grand Master and on September 15, a letter was written and mailed to the Grand Master outlining the situation and circumstances. The Grand Master responded quickly, appointing Brother Myers as his representative in this matter.

In the September 29th issue of the Progress, a notice appeared of an organizing meeting, but no date was yet set. On this same day, Reverend Ross offered Wesley Hall as a meeting place. On October 5, Brother Frye sounded out Tempe Lodge to determine their opinion of the new Lodge.

The meeting date of October 26 was chosen and printed, notices were distributed to known Masons in the area. Brother Myers wrote confirming the date and his attendance at the meeting. Follow-up cards were mailed on October 24 to ensure the best possible turn out. Additional confirmation with Brother Myers was made on the 25th.

Finally, the important date of October 26, 1949, had arrived. The meeting was called to order at 8:00 p.m. Brother Louis Myers, introduced by Brother Ollie Wilson, discussed critical issues and timing situations for the formation of a new Lodge. The Rules from Grand Lodge included:

Brother Myers was extremely helpful during this meeting, offering many suggestions and providing the guidance so necessary in these circumstances. Topics of discussion included property, building, initial membership and first elected Officers.

During this organizational meeting, twenty-five Master Masons committed to demit from their home Lodges and work to organize the new Lodge in Scottsdale. These home Lodges were located in Ohio, Virginia, California, Louisiana, New York, Oklahoma, Massachusetts, as well as various Lodges within Arizona.

A nominating committee was appointed and Reverend Ross passed out the address cards to all in attendance. Several follow-up meetings were scheduled, including a sojourn to Tempe Lodge for an Official Presentation. The first organizational meeting was then adjourned at 10:00 p.m.

Building of a Lodge

The following months saw much activity to bring the new Lodge into being. On November 2nd, four Brothers sojourned to Tempe Lodge 15 and received a vote of “confidence” for our new Lodge.

On November 10th, a meeting was held to discuss building issues and to establish a building committee. This committee would also be known as the Real Estate committee. The Refreshment committee was also formed and appointed during this meeting. Another meeting was scheduled and pledge cards were to be included for all Members.

The Real Estate committee met several times, discussing costs of both building and lot. Two lots were discussed in detail and other properties were also discussed as possibilities. As an example, a 63′ x 310′ lot on Grammar School Rd. was priced at $1000.

On December 8th, prior to the third general meeting, word from the Grand Lodge of Arizona indicated their gratification of our endeavor. We were advised to buy Lodge land in the name of the committee and, most importantly, to organize right away.

December 8th was the most important meeting for our Lodge, receiving the release of the jurisdiction of Tempe to the Lodge in Scottsdale. The Treasurer was elected by secret ballot and it was decided to elect Officers at the next regular meeting in January.

The ways and means of raising monies was discussed and it was decided to take an option on the Grammar School Rd. lot. Decisions on individual contributions were held and pledge cards were distributed to all. The issuance of bonds was also considered to raise necessary funds.

The nominating committee was appointed for the purpose of presenting the slate of Officers to be elected as the first Officers of our new Lodge. For the first time, refreshments were available and served as the Lodge was called from Labor to Refreshment.

The January 1950, meeting was also a crucial meeting in our Lodge history. Brother Louis Myers, representing the Grand Master (not the Grand Lodge), said we must operate under Dispensation for one year before a Charter can be issued. A Lodge, while acting under Dispensation, may NOT incur debt. The Grand Lodge will meet on April 15 in Flagstaff and we should apply for our Charter immediately following, or about May 1, 1950. Past Grand Master Wolff gave a survey of procedures and instructed the Trustees to take over Title to property or building.

The slate of first-elected Officers was presented to the Members. The Offices of Master, Senior and Junior Wardens, Secretary and Treasurer were filled by unanimous vote. Various Lodge names were discussed and all Brothers were requested to bring their suggestions to the next meeting.

A special meeting was called for February 14, 1950, to make a final decision on building location. Elmer Duhame offered a lot on Scottsdale Rd. and Thomas Rd. Mr. Duhame was introduced and he described the proposed site for the location of the Lodge. He questioned the size we anticipated the new Lodge to be and then formally offered property on Scottsdale Rd. as the location for the Lodge. His offer was graciously and unanimously accepted.

It was during this meeting that Thursday nights were designated as a regular meeting night, so as not to conflict with other established meetings and this tradition holds true to this very day. A regular meeting of the committee was called for March 2nd.

Various committee and other meetings took place over the following two months, primarily in preparation for the Grand Lodge meeting in April.

The building committee was authorized to move ahead with whatever plans they have felt necessary. Approval from Grand Lodge had not yet been granted to our Lodge plans, but no problems were anticipated.

A future Officer’s meeting was held in mid-March for the practice of opening and closing a Lodge. Materials needed for the opening were identified and discussed: Bible, Square and Compasses, Gavels, Jewels, Staffs and Standards.

The Gavel committee met in early April for the last time prior to Grand Lodge in Flagstaff. Proposed by-laws were read and accepted for a one-year period, followed by possible revisions, as needed.

Officer’s meetings were held each Monday during April to help gain efficiency. The slate of Officers had been amended by this time, with O.C. Wilson as Master, Al Brittan and Walter Jessman as Senior and Junior Wardens, Vomen Frye and Enoch Walkingstick as Senior and Junior Deacons, Cliff Shugars and Martin Kavach as Senior and Junior Stewards, Wes Cook as Marshal, Jack Smith as Tyler, Ed Abraham as Secretary and C.H. Wilcoxen as Treasurer.

The request for Dispensation to operate and permission from Tempe Lodge 15 were prepared for the Grand Lodge meeting and demits and certificates had been received by those who desired original affiliation with the new Lodge.

A special meeting was held on May 1, 1950, during which time the Grand Lecturer Frank G. Robertson examined the proposed Officers. The Lodge was opened on the 3rd Degree and all qualifying work was gone through and performed. Brother Robertson said the work was very good and he promised to inform the M.W. Nelson J. Roach (newly elected G.M.) who will pass on our Dispensation.

Brother Robertson discussed different aspects of proficiency in the work and gave advice on various procedures.

On May 8, 1950, M.W.G.M. Nelson J. Roach attended the Officer’s meeting to personally observe the Officer’s work. Ollie Wilson introduced him and he then gave a talk on Masonry and discussed details of our Dispensation. The official request for Dispensation, along with demits and certificates, were presented to him for consideration and the amended by-laws were discussed. Several additions and changes were recommended, made and resubmitted at a later date.

June 3, 1950, was chosen as the date of official presentation of Dispensation to Juanitay Olmo to operate as a Masonic body.

Day of Dispensation and Recognition

Monday, May 29, 1950, was busy for both Members and Officers of the new Lodge. Just days before the presentation of the official Dispensation, many practiced book opening and closing on the 3rd Degree. Furnishings were set up in Wesley Hall and the hall was tyled prior to opening.

Everyone was quite excited and interested in the official visit and presentation by the Grand Lodge on the following Saturday.

June 3, 1950, dawned bright and sunny, for it was a wonderful day in Scottsdale. Over 120 Members and guests attended the convening of the Grand Lodge and the official presentation of the Dispensation for Juanita y Olmo Lodge of Scottsdale, Arizona. During the ceremony, the Grand Lodge installed all elected Officers of the Lodge, as previously named.

On September 7, 1950, a letter was written to one Herbert Earl Shipp, residing at Scottsdale & Berniel Roads in Scottsdale. This letter notified Herbert Earl Shipp he was to be the first candidate elected in Juanita y Olmo Lodge to receive the Degrees of the Ancient Craft of Masonry. 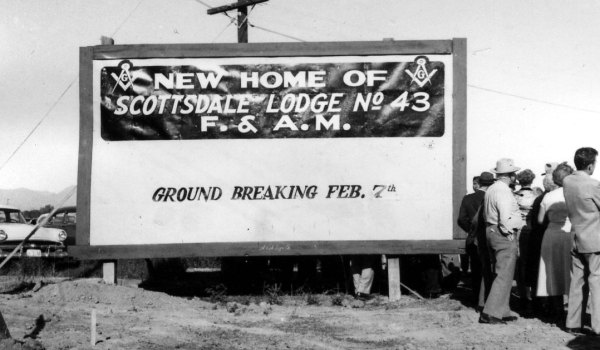 In December 1953, professional plans were presented for the present Temple. On February 7, 1954, ground was broken and on January 6, 1955, we moved into our new Temple.

A prayer for Scottsdale Lodge No. 43 F. & A. M. was placed in the cornerstone on March 27, 1955. “…With the help of the Great Architect, our plans up to here have been fulfilled. Under His guidance, all have helped. May the Great Architect continue to guide and direct our every effort through the years to come.”

To this end. Scottsdale Lodge No. 43 F. & A. M. continues. All the tenets of Freemasonry, Speculative and Operative, are cemented by sound judgment and fiscal policy through strict dedication and adherence to Masonic principles. Our future is secure and bright through the efforts of our Masonic Brethren and we look forward to many more years.